VIERA, FL -- A BPS student was honored by the Brevard County Fire Rescue and the Sheriff’s Office for using CPR to save the life of a girl struck by lightning. 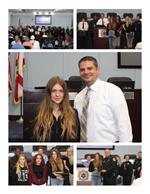 Two girls, Lori, age 14, and McKenzie, age 12, were struck by lightning in June. Lori was in cardiac arrest and was given CPR by Ava, age 14, who is a Merritt Island High student. Ava was on the phone with a 911 dispatcher giving CPR directions to Ava. The brave actions by Ava helped keep Lori alive until deputies and paramedics arrived. Thanks to everyone working together, Lori’s life was saved.

McKenzie also suffered severe injuries in the lightning strike but both she and Lori were able to walk out of the hospital thanks to the quick actions of Ava, the 911 dispatcher, first responders, and the medical staff at Health First and Arnold Palmer Children’s Hospital.

Ava and first responders were honored during a special ceremony where they received certificates and challenge coins for their bravery. Ava, Lori, and McKenzie also spent time together during the emotional ceremony.

Principal James Rehmer from Merritt Island High attended the event and showed his pride in Ava for her actions. Lori also recently started attending MIHS after recovering from her injuries.