Viera, FL - Edgewood Jr/Sr High School's Cultural Diversity Club received a Certificate of Appreciation for their volunteer works with the Candlelighters of Brevard.
On Tuesday, Aug. 30, the Edgewood Cultural Diversity Club attended Operation Superhero, a special event hosted by the Candelighters of Brevard.
The organization serves Brevard and Indian River County families of children who have been diagnosed with cancer. This event honors those "Superheros" as they walk down the red carpet and showcases them as stars in their very own movie trailers.
Members of the Edgewood Cultural Diversity Club acted as paparazzi for the children and their families and assisted during and after the event with food service and cleanup.
Candlelighters' Director, Natasha Duran, thanked the Club saying they were "so professional, spirited, and thoughtful," and said they would "be honored to have them again." 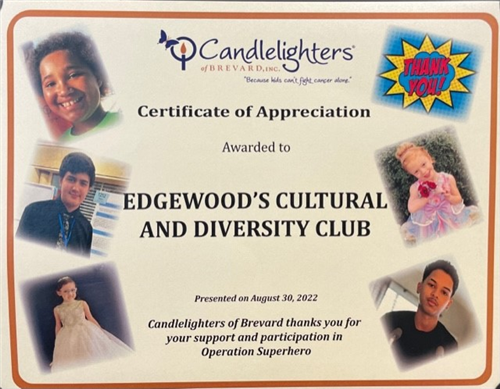