Cocoa Beach 8th-grader, Harlow Johnsey, is making a name for herself in the world of skateboarding. Johnsey, age 13, has been skating since she was 7 years old and hopes to make it to the 2028 Summer Olympics in Los Angeles.

Harlow is no stranger to competing and placing on national and global stages. Just last month, she placed 6th at the US Women’s National Skateboarding Championship in California, and in February, she will be traveling to Dubai for the World Games.

Locally, Harlow has been participating in Grind for Life contests for years. Grind for Life is a 501(c)(3) out of Cocoa Beach “that assists cancer patients with travel expenses.”

Harlow is a native of Satellite Beach, is a member of the Ron Jon Skate Team, and has gained sponsorships from brands like Sun Bum, Triple 8, and Orbs Wheels.

Good luck to Harlow in her future endeavors! She makes BPS proud! 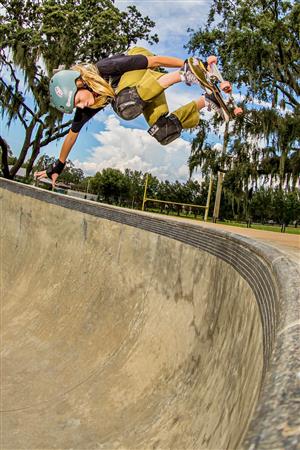